AETERNŌ is an anti-romance collection about the consequential aftermath of loving someone without the fear of death.

The love interests are not romantic heroes, at least, not every one of them will help you carry the story to the happy endings. You can try but I warned you so if I saw a single comment about how it is too bleak, I'm going to find where you live and become your new sleep paralysis demon.

Content Warnings: The game contains triggering contents including sexual and physical assault, drugs, death, etc. For the comprehensive list of warnings, please check it out here before downloading the game.

I. US AFTER THE END

Year unknown, the world is now an eternal winter landscape where snow stretches on for miles no matter where you are. Much of the population have diminished after the previous events leading up to the final winter. You're among the last of the surviving humans, and now you're going to meet your ending.

However, the hand of fate has another plan for you, a stranger met in the wasteland offered his help and pulled you to safety when you were at the brink of death. Yet, peace only lasted for so long before you were once again confirmed to be correct when you refused to take the situation at face's value.

The past calls for you, even after the entire world around you turned into a pale imitation of what it once was.

Nothing is permanent, not even death. After a tragic assassination cut your life short, everyone believed you were gone for good. You would have too, had you not woken to see the light again years later, aged not a day past your own death.

It was abominable, unnatural. After confronting the person who’d had a hand in your resurrection, you were met only with a cryptic answer; a vague promise of an explanation which left you with more anxiety than relief and that person being the love of your life, Isaac, did nothing to assuage your unease.

At the back of your mind, you knew you had to accept the truth: more than two decades had passed since your death, and things had changed. Your friends and family had long moved on. What you didn’t know was whether it was for better or for worse.

You're still reading and I don't know why you'd read this far considering I never read any of the information of the game and just went ooh, shiny then download and never touch the game again since I don't have time to play often.

I have absolutely no idea if there will be more stories after these two but let's assume yes since I currently have two more ideas for this already but I don't know if I will work on them within this year. The plan is to have in total of four stories but that also largely depends on how my artist will handle it. We'll see, we'll see.

Also, the world-building in this is connected, it's not obvious but it's connected. I worked the bare minimum for this world's building, but over the years, they got a lot worse than how it originally is. You know, once you open your arms to certain taboos... it just goes wild.

Anyway, I know the title said Us After The End, the games were meant to be separate until I realized I could have them... you know, together. I will have the game revamped into a cohesive AETERNO build once I work on the second story.

For now... rolls back to King's Raid. 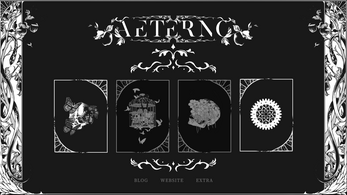